AT times it is difficult to differentiate between madness and love. It defies logic what magnetism pulls thousands of devotees each year to the shrine of Syed Usman Marvandi Qalandar Lal Shahbaz on 18 Sha’aban in Sehwan, where the 755th Urs was held last week (in September 2007).
With temperatures soaring above 45 degrees, pilgrims from all corners of the country, in particular Punjab, start to converge at the small town in Dadu district weeks before the annual three-day event takes place. Many walk barefoot from as far away as Larkana to pay homage to the most revered saint of Sindh. 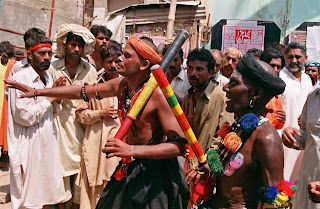 Mohammad Ismail was one such young devotee. Hailing from Muzaffargarh, he abandoned his family to become a Mureed at Bodla Bahar’s shrine, located near the Qalandar’s Dargah. Bodla was a steadfast disciple of Lal Shahbaz and legend has it that he used to sweep the floor with his beard singing ‘Mera Lal Ayega (my saint will come)’ years before Qalandar actually came to Sehwan.
In a ritual that marks the entering into the fold of dervishes, Ismail’s dark long hair and flowing beard was shaved off. The razor did not even spare his eyebrows. After ablution, a pot of clay was placed on top of his head and he was presented before the tomb of Bodla, where he pledged to spend his remaining life in prayer at the shrine. He was then dressed in red clothes and given a new name. When asked who would now look after his four children and nine siblings, Ismail smiled and pointed towards the golden dome of Qalandar saying: ‘Saeen khayal rakheingay (the saint will take care of them)’.

Deedare haq taala darmaane dard mashid,
Deeda baseer beena burhan shud astmara
(The vision of the Beloved is the cure of my agony, The Seeing Eye shows me my destiny)
Sufis believe that death unites one with the Beloved Creator, which is why the death anniversary of a saint is celebrated and not mourned. In fact Urs( a derivative of uroos meaning bride) is an Arabic word meaning marriage. 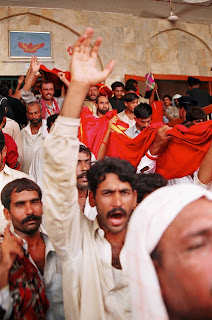 A mehndi ceremony was held in the evening on the second day in which Lal Shahbaz was the Saeen Ghot or the mystic bridegroom. A bridal party led by musicians on the harmonium and shehnai was followed by dancing girls. People were singing wedding songs and holding diyas (lamps) and henna filled trays. A red cloth was held over an old woman who had a bright smile on her face. On reaching the shrine, the saint’s grave was covered with a silk pall and a tray of mehndi was kept at the foot of the tombstone. According to a myth, the handprints of Qalandar are found in the henna tray the next morning.
At the court of the shrine, the Mefil-e-Sama was held where mystics and devotees danced to the beat of Dhammal performed on the Dhul. The Mauj or devotional dance included everyone and shattered all boundaries between Muslims and Hindus, Sunnis and Shias, prostitutes and eunuchs, the pious and sinners, albeit for a moment, in the deafening music.
The mood inside the shrine was euphoric and the environment chaotic as Shia followers of the saint performed a ferocious matam with sharp knives. The flying blood stained clothes of many spectators as white pigeons sitting on top of the tomb’s cage looked on. 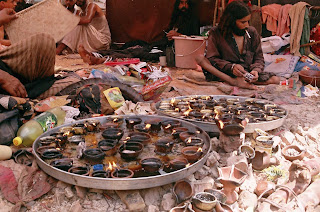 But there’s hardly anything holy about the place in the conventional sense. A variety of drugs, including charas and wine are openly available. The so-called caretaker of the shrine is known more for arranging the best mujras at the festival than anything else and many beautiful girls were called in from Lahore especially for the event. Male prostitution is another reality at the shrine. Gambling dens are also plentiful. It’s ironic that the shrine of Qalandar is now a hub of all activities that he himself was said to be against. 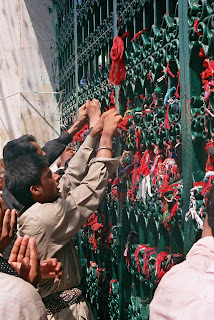 So what exactly were the people coming in for at the shrine? What does Lal Qalandar mean to them more than 750 years after his death? Is it for the ‘good times’ that the carnival at the Urs has to offer or is it for spiritual healing purposes? Or both?
The majority of the people who attend the Urs are the poor, burning their skin under the scorching sun on donkey carts and minivans. Walking as if possessed, their eyes remain fixed on the golden dome which is clouded by red flags.
An old woman Kulsoom who was dancing away at the shrine claimed that she healed from a deadly disease after praying to the saint. The doctors at a government hospital had told her that she would die in a week but here she was, she said, dancing away.
I watched another woman wailing away at the gate of the shrine praying for someone’s life.
Perhaps a saint like Qalandar is the only hope left for them in the world where the influential are busy only in making merry at their expense.
This story was first published in the Dawn newspaper on September 9, 2007.

Salman Siddiqui interviewed British artist Damien Hirst in October 2013 in Doha, Qatar, when he was visiting to launch his art exhibi... 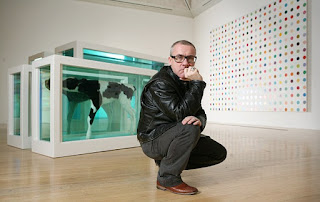